Thailand is a constitutional monarchy and has switched between parliamentary democracy and military junta for decades, the latest coup being in May 2014 by the National Council for Peace and Order. Its capital and most populous city is Bangkok. It is bordered to the north by Myanmar and Laos, to the east by Laos and Cambodia, to the south by the Gulf of Thailand and Malaysia, and to the west by the Andaman Sea and the southern extremity of Myanmar. Its maritime boundaries include Vietnam in the Gulf of Thailand to the southeast, and Indonesia and India on the Andaman Sea to the southwest.

The Thai economy is the world’s 20th largest by GDP at PPP and the 27th largest by nominal GDP. It became a newly industrialised country and a major exporter in the 1990s. Manufacturing, agriculture, and tourism are leading sectors of the economy. It is considered a middle power in the region and around the world. 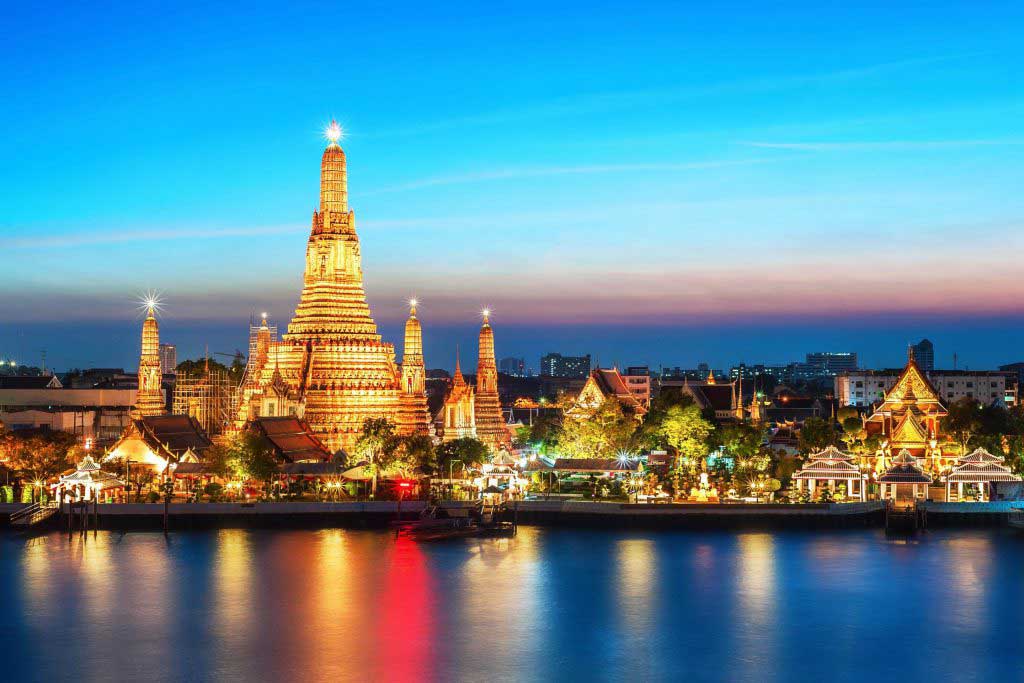 Thai cuisine blends five fundamental tastes: sweet, spicy, sour, bitter, and salty. Common ingredients used in Thai cuisine include garlic, chillies, lime juice, lemon grass, coriander, galangal, palm sugar, and fish sauce (nam pla). The staple food in Thailand is rice, particularly jasmine variety rice (also known as “hom Mali” rice) which forms a part of almost every meal. Thailand was the world’s largest exporter of rice, and Thais domestically consume over 100 of milled rice per person per year. Over 5,000 varieties of rice from Thailand are preserved in the rice gene bank of the International Rice Research Institute (IRRI), based in the Philippines. The king of Thailand is the official patron of IRRI.

Thai culture has been shaped by many influences, including Indian, Lao, Burmese, Cambodian, and Chinese.

Its traditions incorporate a great deal of influence from India, China, Cambodia, and the rest of Southeast Asia. Thailand’s national religion, Theravada Buddhism, is central to modern Thai identity. Thai Buddhism has evolved over time to include many regional beliefs originating from Hinduism, animism, as well as ancestor worship. The official calendar in Thailand is based on the Eastern version of the Buddhist Era (BE), which is 543 years ahead of the Gregorian (Western) calendar. Thus the year 2015 is 2558 BE in Thailand.

Several different ethnic groups, many of which are marginalised, populate Thailand. Some of these groups spill over into Myanmar, Laos, Cambodia and Malaysia and have mediated change between their traditional local culture, national Thai, and global cultural influences. Overseas Chinese also form a significant part of Thai society, particularly in and around Bangkok. Their successful integration into Thai society has allowed for this group to hold positions of economic and political power. Thai Chinese businesses prosper as part of the larger bamboo network, a network of overseas Chinese businesses operating in the markets of Southeast Asia that share common family and cultural ties.